Situation Analysis: The City of Watsonville had an entire fleet of trucks, and therefore had blank space for communication messages as the vehicles traveled around the City. They had several messages they sought to convey and had specific goals in mind. First, they wanted to reach both their English and Spanish speaking population, so each version had to be able to be translated and understood without having to change any graphics or artwork. They also wanted the story to be told by the graphic alone and also by the verbiage alone. That way, if the vehicle was moving, a viewer could capture the message whether just reading, just viewing or doing both. They didn’t have any creative concepts in mind other than to communicate their core concepts. They didn’t have a preference or requirement of using photography or not, so Goldstreet was chosen to come up with creative designs as well as work in partnership on the slogans and verbiage for each truck sticker.

Solution: After careful analysis of the six concepts presented, the design team proposed an illustrative theme that would provide bright colors, simplicity, flexibility and consistency to the campaign. Drafts were presented for a couple of concepts and once approved; the style and design were carried forward to the other messages. Once all artwork and language was approved in English, then translations were done and applied to the Spanish versions. This way, if a Spanish speaking customer saw the sign, they could still get the message through the artwork and vice versa. Street sweeping rules, recycling center information, hazardous waste disposal and general community clean up were all brought to life in a light hearted and eye catching way. 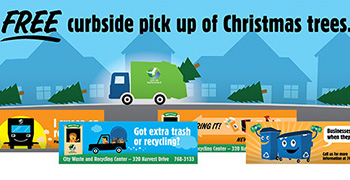 Let’s do it, together.